The properties of honey are sometimes so incredible that when many of us hear about them from friends or family we often chalk them up to a sort of folklore. After all, how can tiny buzzing insects produce a substance that can act as a disinfectant, an anti-inflammatory drug and a sugary snack at the same time? And did I mention that it cannot go bad?

Well, it appears that we all should have had a little more faith! A study carried out by scientists based in the University of Oxford and recently published in BJM Evidence Based Medicine has found that honey is a more effective treatment for coughs and colds (known in scientific parlance as upper respiratory tract infections, UTRI) than standard antibiotics.

The medical properties of honey have been known for decades, if not centuries, but it is rare to see them advertised in the press to the extent that this study has been. We now live in a world where people are ever-more conscious of the environmental impact of their choices and actions. With people trying to be plastic-free, using less and recycling more, this study could persuade many of them to skip a visit to the pharmacist next time they have a cold and reach for the honey jar instead.

It should be remembered that this is only one study and that many more need to be carried out, especially ones to rule out a possible placebo effect. Honey is no cure-all, but it certainly deserves more attention, and so do the only creatures that can produce such wonder of nature: the humble bees and their flowers.

The most wonderful of all known instincts, that of the hive bee, can be explained by natural selection.    —— Charles Darwin

Have you ever got the chance to look at honeybees’ hives? These hives are sometimes looked after by the beekeepers. In nature, you may accidentally spot them in caves, rock cavities and hollow trees. Such nests are usually composed of vertically oriented, parallel combs made of wax secreted by the worker bees. Each comb can magically contain THOUSANDS of individual cells!

After taking a closer look, you will surprisingly find out that these hexagonal cells can perfectly fit each other. You know what? One simple bee hive can actually be counted as a piece of marvelous architecture. The seemingly regular cells turn out to be the ideal choice for storing the LARGEST amounts of honey using the LEAST amount of precious wax. What an economical and exquisite design!

It is truly hard to believe that in the honey bees’ world where there is no central control, bee hives can be constructed and maintained so well.As mentioned in the book Honeybee Neurobiology and Behavior, such cooperative behaviors are called “spirit of the hive”. What is noteworthy here is that the QUEEN of the bees is not the ruler of all bees. To be more specific, she issues no orders and obeys all the rules. Rather than the restrictions of some dominant and mandatory rules, worker bees coordinate relying on the stimuli like various chemicals that they encounter in the environment. That is to say, such a complicated social organization runs in good order without any laws and regulations.

However, believe it or not, the ancestors of honeybees didn’t build their hives in this way. Such changes are totally the results of natural selection.

According to Darwin, honey bee hives used to be simpler spherical cells rather than the current hexagonal cells. If you happened to be familiar with bumblebees, you may draw the conclusion that in the past, honeybees built their hives in a way similar to that of modern bumblebees.

PS: Bumblebees and honeybees can be counted homologies and they both belong to the Apidae family. To distinguish between them, bumblebees are fat and furry, while honeybees are smaller and slimmer. What’s more, bumblebees usually live in nests with a few hundred bees. On the other hand, honeybees live in larger groups with between 20,000 to 60.000 bees.

To tell the truth, bumblebees’ spherical cells can be built more easily as the bees can directly sweep their compass-like abdomens to carve out the spheres.

However, due to the strong desire to produce honey, house the brood and store food, honeybees began placing their cells closer and closer. After great efforts, they made these cells more regularly spaced and managed to patch up the intersections.

Considering building hives as a species-typical behavior, there is no doubt that it transforms from one simple version to an updated version via the evolutionary steps. Although bumblebees and honeybees are closely related species, honeybees turn out to be the ones having the ability to build more complex and stable hives.

Through evolution, these diligent honeybees are able to provide themselves with the largest amount of storage space, having the greatest possible structural stability and using the least possible amount of wax. Congratulations on the honeybees’ efforts!

Our hive visits are usually restricted to society members only, but what better time than LSESU Green Week to have a Beehive Open Day? In fact, we had not one but two open days – one for students and one for staff. The staff open day was particularly popular: the 30 available spaces got booked out within hours of being announced on the staff newsletter.

It was too cold to open the active hives, but we opened an empty hive to see the internal architecture and took a sneak-peek into a working colony through the perspex window of the observation hive. Best of all, some of the first-time visitors liked it enough that they joined our society, so we will be seeing a lot more of them in the near future!

The hive visits were followed by a fascinating “Beekeeping 101” talk by Luke Dixon, a professional beekeeper who helps us look after our rooftop hives. 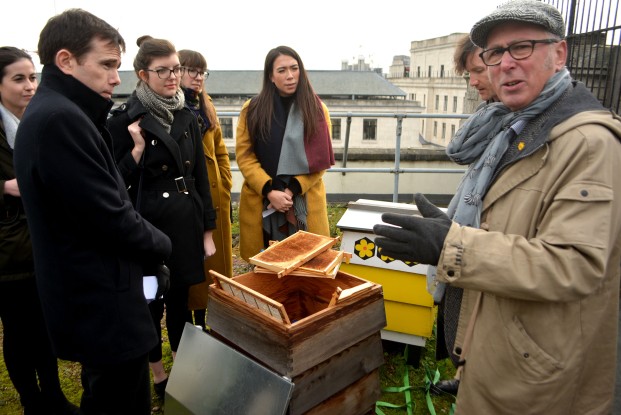 As part of LSESU Green Week 2018, we organised a Honey Bake Sale, where all items – sweet or savoury – had to include honey as an ingredient. 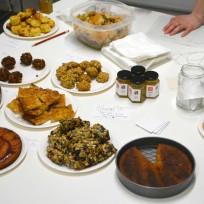 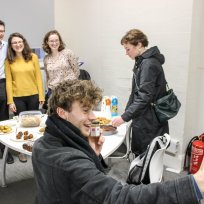 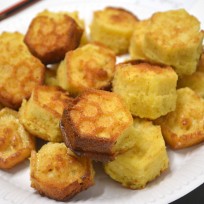 Alaina’s baklavas won the popular vote and she took home a jar of LSE Honey as her prize. But every single dish was delicious, and we especially loved the bee-themed ones: the honeycomb Madeleines and the Honey and Ricotta Cake with a bee design (pictured above). Iselin, who baked the Honey and Ricotta Cake, kindly shared the recipe with the note, “I used berry liquor on sale instead of rum (poor student).”

After the bake sale we had a screening of Rotten: Lawyers, Guns and Honey – a gripping Netflix documentary about the dark side of the global honey industry, rife with adulteration, hive thefts and other shady dealings. Refreshments were provided (what is a movie night without popcorn!) though most people had already stuffed themselves beforehand on the bake-sale offerings.

Our honey tasting session on 16 November was a great success! Many of us stopped by after class to taste samples of last year’s harvest of LSE Honey and compare it to jars from previous years, as well as a few different varieties of supermarket honey. It was surprising how different honey can be based on the location and pollen sources of the bees producing it. At the event, we also sold over half of our honey harvest for the year (after volunteers individually labelled and hand-numbered all 86 jars)! 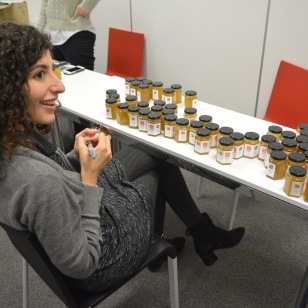 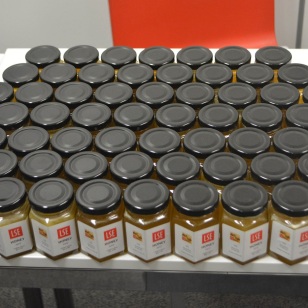 Following the success of last year’s spring trip to Kew Gardens, the society headed back to the Gardens on Sunday 29th October, to appreciate the beauties and secrets of autumn, and of course learn about bees and beekeeping.

The highlights of the trip included a visit to the Palm House, where we learnt about the importance of bees for pollination of plants such as coffee, as well as the effect caffeine has on the bees. Incidentally, Professor Lars Chittka, whom we invited to deliver a talk at LSE last year, has done some fascinating research on how caffeine boosts bees’ memories.

Of course, the Kew experience would not be complete without a visit to the The Hive installation. We were lucky enough to catch a talk by professional beekeeper Sharon Bassey, who showed us how to catch a swarm, let us taste pollen, honey and propolis, and talked about the potential social impact of beekeeping, with examples from prisoners at HMP Wandsworth, children in Tower Hamlet’s schools, and to combat post-traumatic stress disorder in the army. 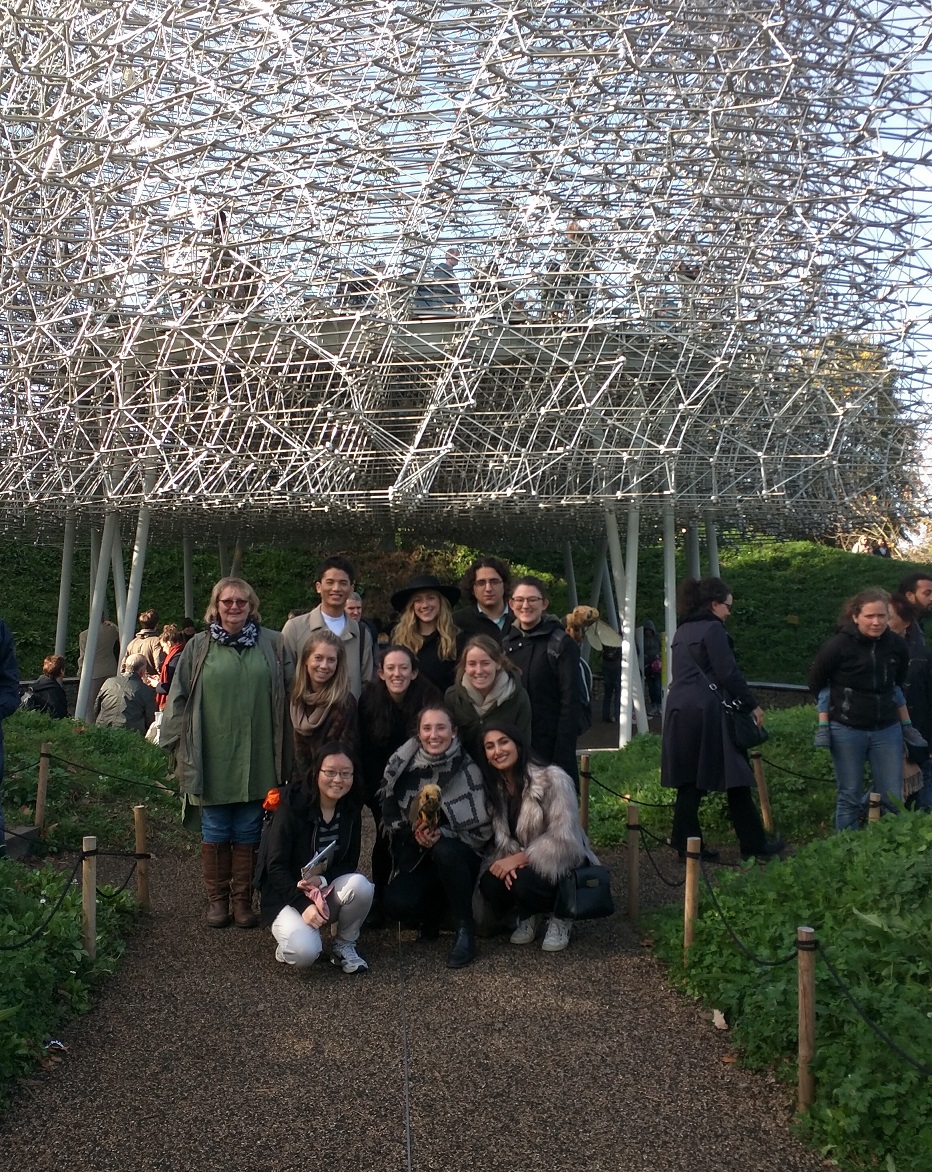 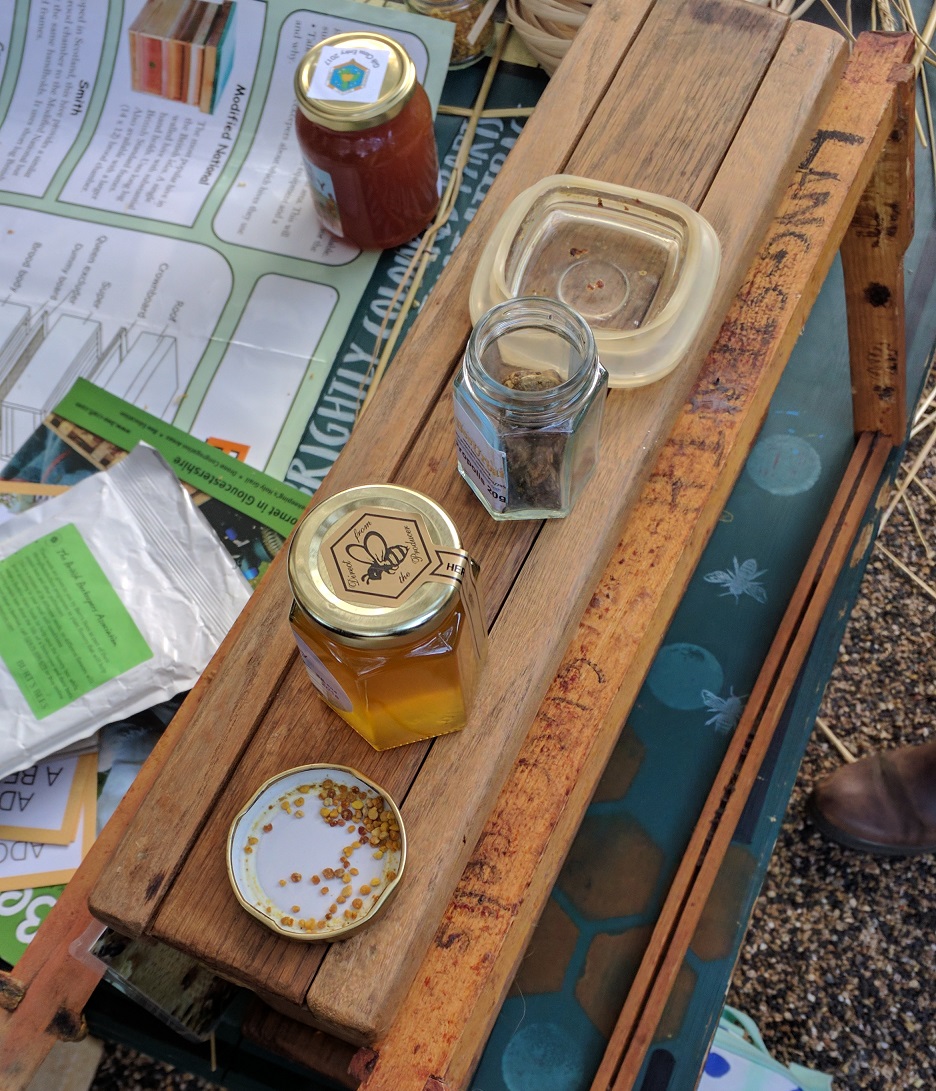 Finally, after a picnic in the park to restore our energy, we started a small ‘treasure hunt’ to find the Kew Gardens bee hives. It wasn’t easy, but we (or at least some of us) found it!

LSE Bees is run by the LSE Estates Division Sustainability team and works in partnership with the LSESU Beekeeping Society.

Click here to join the LSESU Beekeeping Society, or email us at beekeeping@lsesu.org